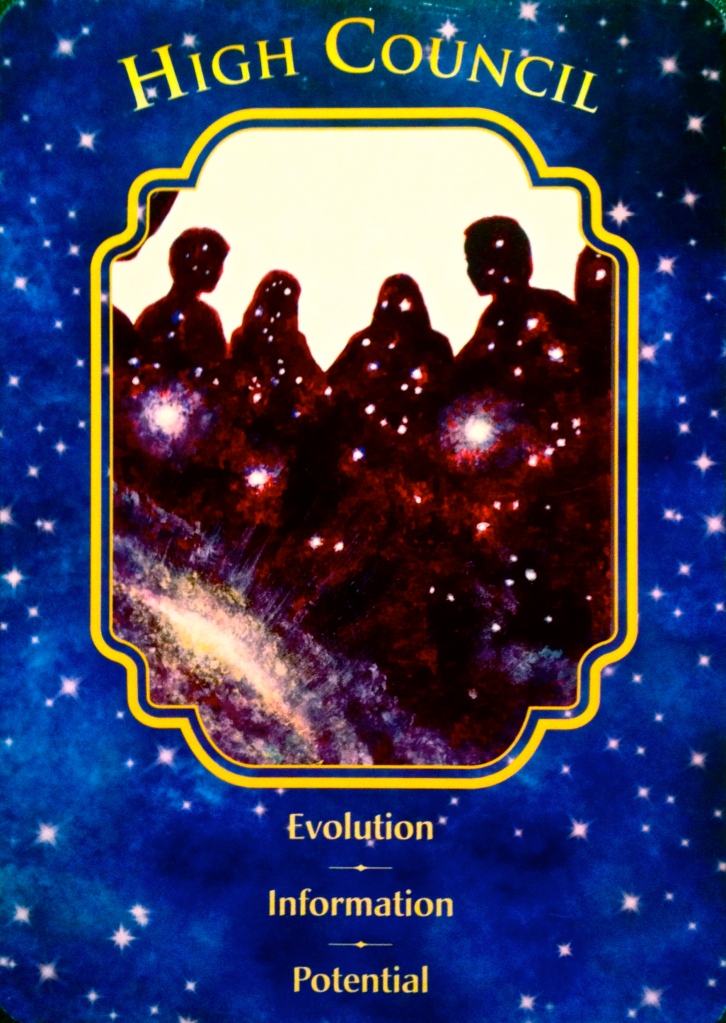 “If you have nightly dreams about going to a mountaintop, city hall or a library, you are connecting with the High Council. This card shows up to help you become the best possible you. The High Council is an alliance of beings from across universes who have come here to help you who have come here to help you on your evolutionary journey on this planet. These beings of love and light are trying to get your attention. There is an important project or task that you are being asked to take on. The size of the assignment doesn’t matter – large or small, it will create a shift for the highest good of all.

The High Council is coming to you in dream time to “download” messages into your energy field for retrieval at a later date. This information is to be used when it is needed for the evolution of you as a human, and for the earth as a whole.

Additional Meanings Of This Card: You have much potential. You are being encouraged to move forward with your development in all areas of your life. Think about your spiritual perception. Does it need to shirt? You are being reminded that the Divine mantle is always about your shoulders, lending you strength and help in your daily life. All you need to do is ask.”*

I often dream of meeting with a group of people who in my dream, seem very familiar to me, yet when I wake up, I have often puzzled about who they may have been. I have been in a casual “meeting” which almost felt like an interview in front of a board, although somewhat casual, and I have also been to enormous, seemingly never ending libraries. Now I know why! This is such valuable information to me, and yet it is not a surprise, as I have recently read about just this sort of thing in various Dolores Cannon books, most recently being The Three Waves Of Volunteers To The New Earth… if you are open minded and ready for the next level, I highly recommend reading this book! However, I understand that not everyone is ready for what Dolores Cannon has to say. When you are ready, you will know and the book will call you.

Dreaming about the High Council is a sure sign that you are being called to fulfill your life’s purpose; the reason why you chose to come here to planet Earth to help in the first place. It is time to remember. You are here to heal, and you have special gifts and talents that the world desperately needs right now, you must have faith in yourself and follow your intuition and your heart. If you are not sure, but still have that “nagging feeling” that you are supposed to be doing… something important… ask for help in remembering.

Before you go to sleep at night, close your eyes and let your angels know you are ready and willing to receive messages and informational downloads to guide you to your life’s purpose. Then keep a dream journal close by and write down the thoughts you first have upon waking up. Look for patterns, symbols and signs that may mean something only to you. This is personal, and you don’t need to share with anyone who may discourage you from doing this. Do what feels right for you and keep it private. Dreams are a valuable resource for connecting to the Divine and strengthening the connection to your higher self, which will build your confidence and belief in yourself. For a little extra boost, you can program a quartz crystal to help you connect to your dreams, asking for clarity and information; then place it under your pillow. Be sure to put it out under the full moon and new moon to clear and purify the energy.

This site uses Akismet to reduce spam. Learn how your comment data is processed.